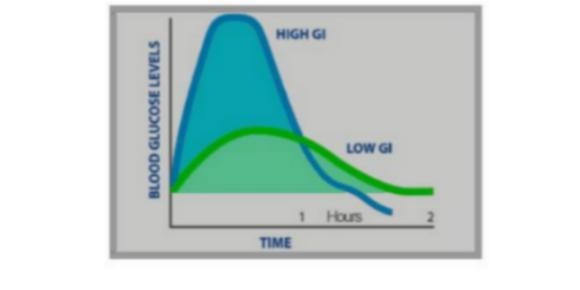 The Glycemic Index or GI is a scale that ranks high-carbohydrate foods according to how much they raise your blood glucose levels after eating. The GI ranges from 0 to 100. Foods with a high GI are digested quickly and cause a significant spike in our blood sugar levels. This increase in blood sugar causes a corresponding increase in insulin to bring those sugar levels back down. Low glycemic foods have less of an impact on your body because they are digested and absorbed more slowly, so you need less insulin to control your blood sugar levels. When sugar and insulin aren’t spiking, you won’t get that light-headed or weak feeling. You just feel normal.

There are many more advantages to choosing a low glycemic diet. Low glycemic foods are beneficial to our health because controlling blood sugar and insulin levels is one of the keys to reducing our risk of heart disease and diabetes. Low GI diets are also useful for controlling our appetite and aiding in weight loss.

When our blood sugar levels are maintained relatively stable, our bodies perform better. A study from the Harvard School of Public Health demonstrated that high GI diets are strongly linked to an increase in the risk of Type II diabetes and heart disease. The World Health Organization recommends that people in developed countries eat as many low-GI foods as possible, to prevent heart disease, diabetes, and obesity.

A hundred years ago, our foods simply took longer to digest. They came straight from the farm to our table, in its natural state, containing the original fiber and other natural components they were grown with. Modern food processing practices have stripped our food of many of its natural properties, making it easy to package and store, and extremely quick to digest. And the faster we digest the food, the quicker we get hungry again.

This is the “roller coaster” that happens when we consume too many high GI foods. High glycemic index foods may give you a burst of energy, but this is followed by a “crash” as the insulin takes the blood sugar back down and you feel hungry again. To make things worse, these insulin spikes turn all that excess blood sugar into fat, which is usually stored right around the abdomen.

On the other hand, when we consume low glycemic foods such as fruits, vegetables, legumes and whole grains, the rise in blood sugar is slower and more sustained over time. That means you feel fuller longer and are less tempted to eat again so soon. Our energy levels are maintained throughout the day, which not only provides health benefits but also makes us feel better, because we’re not on that up and down cycle from morning to night.

If you would like to increase your consumption of low glycemic foods, here are some suggestions.

Eat less of the following:

•     Avoid sugary snacks, especially those made with refined sugar. Not only are they high GI foods, they are mostly empty calories.

•     While potatoes are nutritious, especially with their skins intact, they are also very high GI foods.

Eat more of the following:

•     Eat foods with lots of fiber, which tends to lower the glycemic index of everything you eat.

Interestingly, the cooking method can affect the GI rating of a food. For example, boiled potatoes are rated an 81 on the glycemic index, while baked potatoes rate as 119 and mashed potatoes 104. However, rather than obsess about individual GI food ratings, remember that the most important goal is to have a low glycemic diet overall. Eating the occasional high GI food is OK, especially if you also eat a low glycemic food along with it.  Try to focus on eating a healthy, balanced diet including a wide variety of whole, natural, and fresh foods. By doing so, you won’t even have to consult the GI scale, because you’ll be eating a relatively low glycemic diet and gaining all the benefits described here.